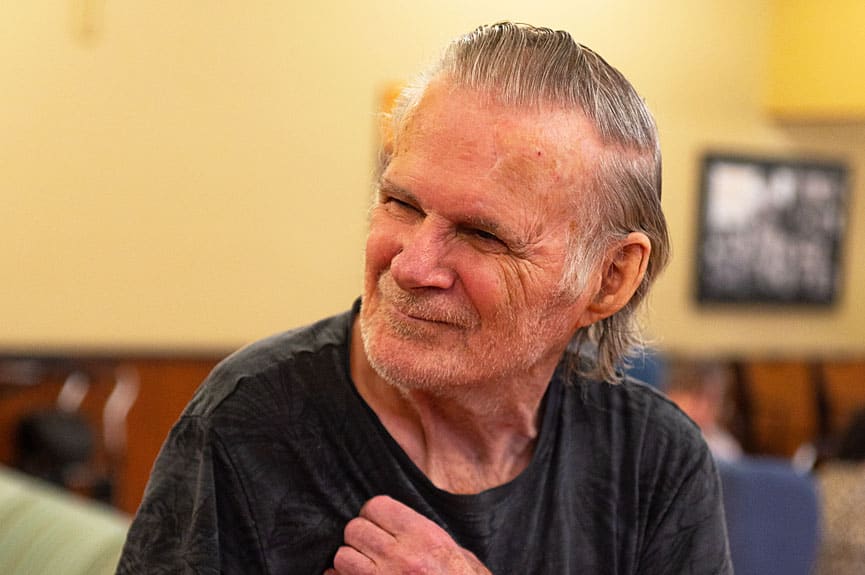 Jack is one of Elmwood’s original residents as his first application to Elmwood was in 1969, the year of Elmwood’s incorporation.  Jack is truly a member of the Elmwood family as he has experienced support and care throughout his life as he has participated in all Elmwood programming.  When Jack first came to Elmwood and became part of our family, he resided in Kinsmen Manor, known as Kinsmen Elmwood Lodge in those days.  After a number of years, Jack moved into one of Elmwood’s Group Homes.  As it was recognized that Jack was a man of many talents and resources, he became one of Elmwood’s original participants in their Supportive Independent Living Program.  For many years, Jack lived independently in his own place in the community with support from our SILP program.  As Jack is a fiercely independent man, he continued to live in his own place until he turned 80 years old.  This is such a significant accomplishment as many of us may not be able to do so when we reach such an age.  At 80, Jack recognized that he would benefit from some enhanced support and decided to make Kinsmen Manor his home once again after 46 years!

Jack is a man of many talents and holds many interests. To name just a few, he has been known to purchase cars, play a mean and competitive game of pool, enjoy a drink of dark rum, call on car ads in the paper and dance until the wee hours of the night when given the opportunity. Jack also loves to joke around and challenge others. He is a true and old school gentleman. He will open doors for women, is polite, well mannered and is a pleasure to share a meal with as he has impeccable table manners and engages in meaningful, colorful and comical conversation.  Although Jack is now in his 80’s and is the eldest of all Elmwood residents, he has a very colorful sense of humour.  Those who know Jack best never leave his presence without having a good laugh and smile as this is what Jack does best, making those around him laugh, smile and feel good.

Jack values the friendships he has made with both the residents and staff at Elmwood. We are very fortunate and blessed to have been able to have Jack as part of Elmwood’s family for so long.