Elmwood is about to embark on an exciting transition over the next 3-5 years.

Elmwood Residences was founded in 1969 and was established as a community based residential service for adults with intellectual disabilities.

The intention was to provide supports and services that reflected a home and family life environment which would develop a sense of self-worth and belonging in each individual. 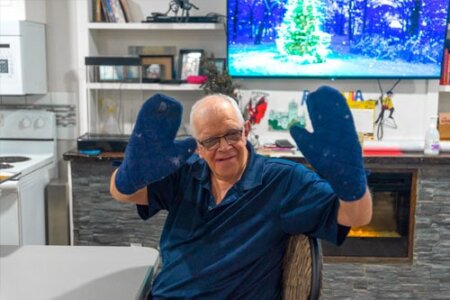 The first residents joined Elmwood in fall of 1969 and we currently have 35 residents
who call Kinsmen Manor home. Since the beginning of Elmwood Residences, the Saskatoon Kinsmen have been generous donors, both in financial and individual resources. On Sept 8th, 2008 the Manor was renamed Kinsmen Manor in recognition of the Kinsmen being a devoted and long-term supporter of Elmwood’s residential supports and services.

The residents who live at Kinsmen Manor are supported in many ways including physically, socially, emotionally, and spiritually which supports each individual to reach their full potential. Through generous donations, the McNeill Fitness Centre opened in January of 2013. This was an amazing addition to Kinsmen Manor as it provides residents who live in the Community Homes and Kinsmen Manor opportunities for recreational, physical and social activities.

The Manor also has a Family Activity Room which was recently renovated in the Spring of 2018. This smaller space facilitates opportunities for relaxation and socialization. It also has an accessible kitchen where the residents regularly enjoy baking treats.