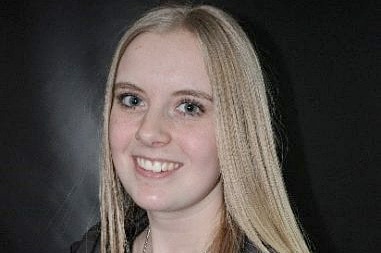 Haylie grew up in Kindersley and after graduation she moved to Rosetown with her family for three years. During this time, Haylie identified her desire to live in Saskatoon to gain independence and opportunities. She applied for service with the support of her Mom and joined Elmwood as part of the Enhanced Supportive Independent Living Program (ESILP) in 2019. This program is focused on supporting Haylie to develop the skills she needs to enhance her independence.

Haylie lives with her three roommates who she is good friends with. Since moving into her new home in the summer of 2019, Haylie has been learning life skills to become more independent. Haylie loves a clean home and is learning many new recipes in the kitchen. She loves to BBQ for herself and her roommates. Delish!

Since childhood, Haylie has been an active athlete. Her favorite sport is hockey because being on the ice makes her feel proud and free. Haylie is part of the Special Olympics floor hockey team.

For many years Haylie has done volunteer work! She is an involved volunteer at Kinsmen Manor and has formed many close relationships with the residents. Together they read and make crafts. Everyone at the Manor looks forward to the days when Haylie comes to volunteer.

Since moving to Saskatoon, Haylie has secured employment at Montana’s as a hostess. When speaking with Haylie she stated, I enjoy living in the city. It has changed my life and made me more of a responsible independent woman. There’s so much to do and see. I like walking on the trails around the river. It’s such a beautiful atmosphere.