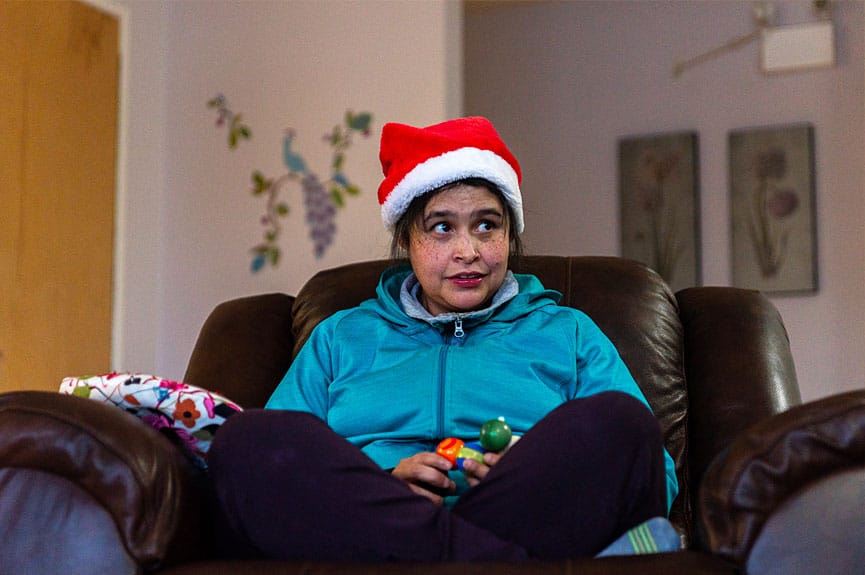 Sky Cuthand grew up in Saskatchewan. Her mom Ruth says Sky is one of the happiest people she knows.  Ruth who was a single mom of two, raised Sky and her younger sister at home. Sky had a cat named “Deuteronomy” growing up. The name is from one of Sky’s favorite musicals, “Cats”. To this day Sky still enjoys watching musicals both at home and especially attending musical events here in Saskatoon. Another one of Sky’s favorite things is Circus du Soleil. When Sky was about 25 years old, Ruth thought it was time to think about Sky’s future. She met with Sky’s advocate and with Social Services to talk about future possibilities.

Elmwood became one of the possibilities. At that point Ruth thought it would take years to get Sky into her own home. It took 8 months and Sky moved into an Elmwood home in July of 2000. Ruth saw shortly after Sky moved into her home that she had all these people providing her opportunities to grow. Sky is very active at the Phoenix Club dances, which is another one of her favorite things. You will always see her with her favorite hats on, and she will always try to dance with others.   She is a social butterfly and loves interacting with others. Sky is truly one of the kindest and happiest individuals we all have met. Sky and Ruth enjoy weekly visits together at Sky’s home with another one of her favorite things – Marshmallows.